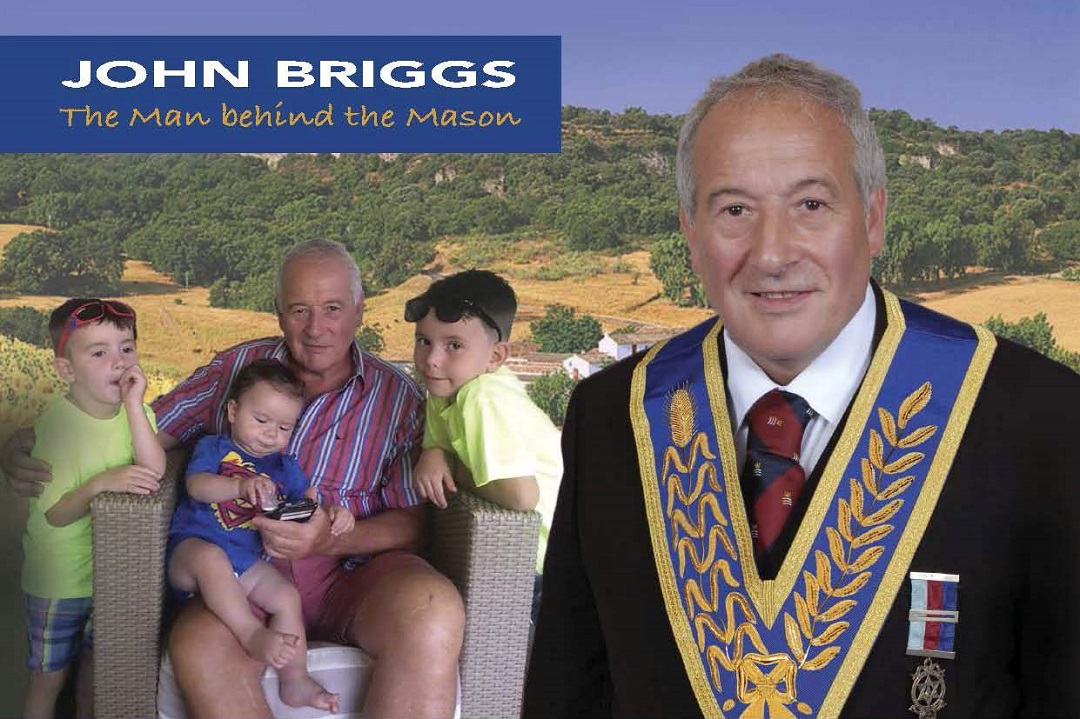 As told to Paul Steventon, Editor of The Mercury

There cannot be a single Mason in Middlesex who doesn’t know John Briggs, even if it’s only him trying to sell you a pair of gloves or a Festival tie at one of the Provincial events, or perhaps, persuade you to donate to The 2020 Festival.

He is, in case some of the newer members don’t know, the Provincial Grand Charity Steward and he has done an incredible job in helping to raise the remarkable sum reported on the http://www.the2020festival.co.uk/ website.

I had set aside most of the day for this interview as I thought it might be a Gordon Bourne type interview – ie. Long !

I know a number of people that can talk the hind legs off a donkey, but it’s only John Briggs that can persuade it to go for a walk afterwards.

So I settled in for a marathon session, but to my surprise we had finished in an hour and then we had a very enjoyable lunch – albeit a long lunch !

Q: Where were you born and where did you grow up ?

A: I was born at 17 Granville Road, Kilburn and lived in the area until the age of 21.

All of my family come from Kilburn and it was a great community where everyone knew each other.

My first school was St John’s, I then went to Percy Road School, which was a fantastic school, before going to Kilburn Senior High School.

I then went straight out to work, although I did go to Uxbridge College, just before joining Freemasonry, and got an O’level in law, which I was always interested in.

The first job I had was in demolition.

I always had an interest in buildings and it is quite a skill taking a building down.

I worked hard and worked my way up to what was called a Top Man.

We used to take down motorway bridges, power stations, all sorts.

We were a poor family and I wanted to save up to buy a car and by the age of 17 I had bought a Ford Capri.

None of my friends had cars, in fact nobody I knew had a car.

It was certainly worth all the hard work.

I stayed in my first job until I was about 20, but because I wanted to buy a house and it was difficult to get a mortgage if you were in the building trade, I got a job at the Post Office.

I sold my car for the deposit and because London was so expensive I bought a house in Ipswich.

Whilst at the Post Office I still worked in the building game.

After a number of years at the Post Office I went into partnership with my brother but in 2001 we had a bit of a falling out so I started up on my own.

I also moved house every 18 months or so, it’s a good way of moving up the ladder to bigger and better houses.

I would buy a delapidated house, do it up, sell it and then buy a bigger one.

The worst things about the building trade are, one, the customers and two, the people that work for you.

I never enjoyed it, I should have gone into something different, but I can’t complain.

Q: Who brought you into Freemasonry ?

A: My next door neighbour actually brought me in which was 25 years ago, however, back in the late 80s and early 90s we used to go to my Brother-in-Law’s Ladies Nights.

Q: What do you get from Freemasonry ?

A: First of all, friendship.

I’ve  got some good friends in Masonry.

You meet people in all walks of life and I have some good friends that I would otherwise not have met.

Secondly, the great satisfaction that we help so many charities.

Charity is probably the most important thing we do.

Q: What hobbies or interests do you have outside of Masonry ?

A: Football is my main hobby.

I used to play to a good level when I was young but I stopped when I was sixteen as I got into other things.

I asked him what ? to which he replied ‘sex,drugs and rock’n’roll’, and then said he was never very good at rock’n’roll !

Once I had children I went into managing football and became Club Director.

I now love watching football, my team being Manchester United.

I play golf and I play quite a lot in Spain (where he has a house).

Cars are also an interest, but I don’t like spending money on cars.

I don’t know much about art but I enjoy looking at great art.

Q: What was your best holiday or the most interesting place you’ve been ?

A: That’s a difficult one.

Last year we went to St Petersburg which I thought was an outstanding city, the buildings and the history are fantastic.

Budapest was fantastic and Vienna was great.

I don’t do beach holidays as I find them totally boring, I prefer to wander round looking at things.

Even places like Las Vegas are great as there is lots to do.

A: Probably the only thing left I would like to do is go to Japan.

Q: What excites you ?

A: My grandchildren coming round, I just love playing with them and spending time with my family.

Q: What annoys you ?

A: People who keep sniffing, bad manners at the dinner table, bad driving, lack of respect, people who underestimate others, people who become your friend because they want something from you and people who interrupt oth… I decided at this point to jump in and ask the next question as I felt this list would go on forever !

A: It use to be lager but I’m slowly becoming a non drinker really.

I do enjoy a nice glass of wine.

A: I love the city but probably prefer the countryside.

A: Lobster as a starter and then a fillet steak for the main course.

Q: Friends round for dinner or going out for a meal ?

A: I probably enjoy friends round for dinner more.

A: Probably The Blue Danube by Johann Strauss which was used brilliantly in the film ‘2001 A Space Odyssey’ but I do have a wide musical taste.

A: Dogs – I’ve had some great dogs over the years.

A: Art Galleries but it depends on the artists, although because I like furniture places like the V&A are great.

If I have to pick one then it would have to be Art Galleries.

A: Football – I don’t understand rugby at all.

A: Spring or Autumn

Q: If you were on a desert island what book would you take ?

A: Lesley (his wife) reads a book a week but I don’t read much at all.

It would probably be a biography on Churchill as I’m a Churchill fan.

Q: And finally what would be your luxury item ?

A: It would be nice to take my wife but I guess she’s not allowed, in which case it would be a wind up radio.

John is always good company and like his luxury item you just wind him up and let him go and he will talk for hours.

The lunch was moving into afternoon tea and had the possibility of encroaching upon dinner so I decided to get the bill.

As told to Paul Steventon, Editor of The Mercury

This article appeared in the Autumn/Winter 2019 Edition of the Mercury, which can be viewed HERE whilst hard copies are available at all Middlesex Masonic Centres while stocks last.

Jim Mitchell – The Man Behind The Mason

A Middlesex Mason In Oz

Middlesex Mason does a runner !