The Middlesex Memorial to the Dead of the First World War situated in the former Middlesex Guildhall, Parliament Square, Westminster

Remembrance Sunday is a special day for citizens of the United Kingdom and for those of other countries who were formerly part of the British Empire and fought gallantly in the cause of peace and to oppose tyranny.

In the First World War men of Middlesex fought in campaigns in France, where 400 men of the 4th Battalion Middlesex Regiment (Duke of Cambridgeshire’s Own) lost their lives at the Battle of Mons in August 1914. Little would they know of the scale of horror that was to unravel as the war continued.

Also, in 1941 men of the 1st Battalion fought against the Japanese Imperial Army at the Battle of Hong Kong before surrendering.

This is only one part of the whole story of courage and bravery under fire resulting in death for some and mutilation for others.

However, not only do we remember the Army but also those who served with the Royal Navy and Royal Flying Corps (at the time of the First War), but in subsequent conflicts in different theatres of war across the Globe where the emphasis was to “keep the peace”.

RAF Uxbridge was responsible for the aerial defence of London during the Battle of Britain and for providing air support during the D Day Landings.

Equally important was RAF Northolt which also played a key role during the Battle of Britain.

Thirty Allied airmen including servicemen from Belgium, Canada, Czechoslovakia, New Zealand, Poland and the United Kingdom were killed flying from RAF Northolt during the Battle of Britain, of whom ten were Polish.

The Polish War Memorial is dedicated to all Polish airmen who lost their lives during the Second World War.

There were also other establishments within the County given over to defence pursuits.

No doubt there are surely Middlesex Men who served with the Royal Navy and perished at sea whose memory is still cherished on this special Remembrance Day. 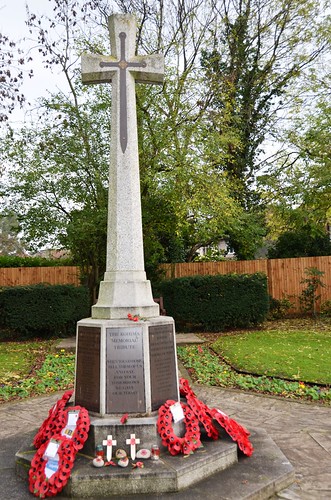 Brethren of the Masonic Province of Middlesex paid tribute to the memory of all those men and women who over the course of years, including modern times, have made the ultimate sacrifice in the line of duty.

So, on Sunday 8th November 2020 wreaths were laid on war memorials from Chipping Barnet to Shepperton and from Uxbridge to Southgate and many places in between.

Those who have served in the Armed Forces will understand the respect and reverence held for those who have departed to another place having given the ultimate sacrifice in the service of their country.

Even in the current situation of lockdown members of the Province were still able to give good account and place wreaths at the various locations.

It was noted that in some cases the brief wreath laying was held in deserted town centres particularly Harrow where W. Bro David Pearson PProvGSec accompanied by his wife Meg did the honours.

In Northwood E. Comp John Eynon PGStdB, Deputy Grand Superintendent was charged with wreath laying in Northwood along with his wife Sue who said it was a rare privilege and honour to do so.

In Twickenham members of the Middlesex Armed Forces Lodge, No. 9940 including the Worshipful Master, W. Bro Robert McLintock, together with W. Bro Peter Annett APGM laid a wreath at the Kohima War Memorial.

Kohima is located in India and was the sight of a strategic battle against the Japanese in 1944 against the odds. Many lives were lost on both sides including many Sikh and Hindu soldiers.

Elsewhere in the Province, at Chipping Barnet, W. Bro Paul Huggins APGM along with members of the Hadley Highstone Lodge, No. 4203 paid their due respects. W. Bro Paul Huggins made the comment that the parade in Chipping Barnet normally numbered about 350 people many of whom would be members of the TA, Scouts, Cadet Corps and numerous other units.

Regrettably, this year there were no parades, just a solitary remembrance as W. Bro Paul laid the wreath at the memorial.

It was a time for him to remember his Uncle Jack who died leading his men “over the top” at the Battle of Somme.

It should be noted that Paul’s father served in the First World War.

The tragedy of war is that it is inconsiderate of timing and his Great Uncle Ernest died only 9 days before the end of World War Two attempting to diffuse a bomb.

He had commanded a bomb disposal unit as a volunteer as he was over age for usual service.

He was accompanied by Mrs Anne Pigram, the widow of the late W. Bro Clive Pigram, the APGM responsible for the organisation of the Provincial wreath laying services and subsequent development.

Further south in the Province, W. Bro Robert Rough APGM accompanied by his wife Sam, laid a wreath at Staines.

Once again, the normal numbers who would attend were missing.

The important thing was that tribute was made.

Heading back to the North West of the Province, W. Bro Hugh Saville ProvGAlm attended at Uxbridge Peace Memorial and at Harefield, both at the War Memorial and at the Anzac Memorial at St Mary’s Church, the war dead were remembered by Brethren of Harefield Lodge, No. 7417.

Pinner Lodge, No. 3423 also represented the Province by attending at the Memorial, High Street, Pinner.

Next Enfield War Memorial where W. Bro John Briggs ProvGChStwd accompanied by fellow Brethren from Handown Mount Lodge, No. 8183, Edengate Lodge, No. 8181 and Enfield Lodge, No. 1237.

W. Bro John stated that on previous Remembrance Day Services they would meet at 2.00pm in Enfield and join a procession of 50-60 people from other organisations and make their way to the Memorial to lay wreaths.

On this occasion the Lodge members met at 11.00am and, along with a number of other people in socially distances bubbles, they paid their respects.

These events would normally be followed by a couple of drinks in the Conservative Club, but this year it was “dry” and all went home after.

No regrets as the moment had been a special one. Meanwhile at Southgate the Remembrance was held within the confines of St Mary’s Church, Southgate.

This was in the hands of E. Comp Peter de Wolfe 2nd ProvGPrin.

The service being held in the church was broadcast by means of a YouTube video for those who wished to view subsequently. (https://youtu.be/RgCOGe_n56w)

Isleworth War Memorial in London Road had tribute paid by W. Bro John Leggett APGM as did the Richmond War Memorial where a wreath was laid by E. Comp Rob King AProvGP.

Finally, at possibly the southern extremity of the Province, the Very Worshipful Bro Barry Cramer DepGM saluted the war dead by laying his wreath on behalf of the Province at the Shepperton War Memorial in the High Street.

Although this sombre occasion recalls the memory of those who paid with their own lives in the service of their country, it is also a time, perhaps, to reflect upon the service offered by so many others who were able to return home.

They were to rebuild their lives in new and perhaps difficult circumstances and had lost the good comradeship of those left behind on the battlefield never to return. This would leave emotional scars.

The fine tradition of the British Armed Forces lives on where a new generation of young men and women have taken on the yoke of preserving our well-being and defending of our great nation.

Forget Me Not – Remembering the fallen of Finchley