At the Convocation of Middlesex First Principals, No. 3420 held at Twickenham on Monday 19th November, the Most Excellent Grand Superintendent, Peter Baker was pleased to present to the Chapter a 2020 Festival Vice Patron Certificate to the newly Installed First Principal, E. Comp “Mitch” Mitchell PAGDC PProvGSWdB and stated that the Chapter had missed the next award by £89.

Without further ado the MEZ produced a cheque from the Chapter for £5,000 towards The Festival, which adequately covered the shortfall.

At which point ME Comp Peter Baker presented another Certificate, awarding the Chapter Grand Patron status.

This was met with amusement from the Chapter Members and it certainly appeared that there had been some good humoured collusion with the second Certificate having been “prepared earlier”.

The Convocation had been opened by the outgoing First Principal E. Comp Michael LeGray PAGSoj PProvDepGDC.

The three incoming Principals were then Installed by the Provincial Officers and Robes and Sceptres were explained and the Charter of the Chapter was presented to the MEZ.

The Officers of the Chapter were appointed and invested and it also gave the opportunity for a Media Representative for the Chapter to be appointed, a new initiative, to take on the role of reporting news from the Chapter.

This was to be undertaken by E. Comp Stanley Marut, appropriately News Editor for the Middlesex Provincial Media Team

The ME Grand Superintendent rose and spoke to the Members and stated that this was his first visit to the Chapter in his new role, although he was a subscribing Member and served as Chapter First Principal in 2005.

He gave a warm welcome to all guests and visitors and pointed out that the Chapter was probably the most important in the Province and urged all Past First Principals to join.

He also mentioned the fact that this was a wonderful opportunity to enjoy companionship as well as a forum to share information and ideas with one’s Chapter peers in the Province.

The meeting was well attended and afterwards the Companions retired to the Festive Board.

To view photos taken prior to the Convocation click HERE 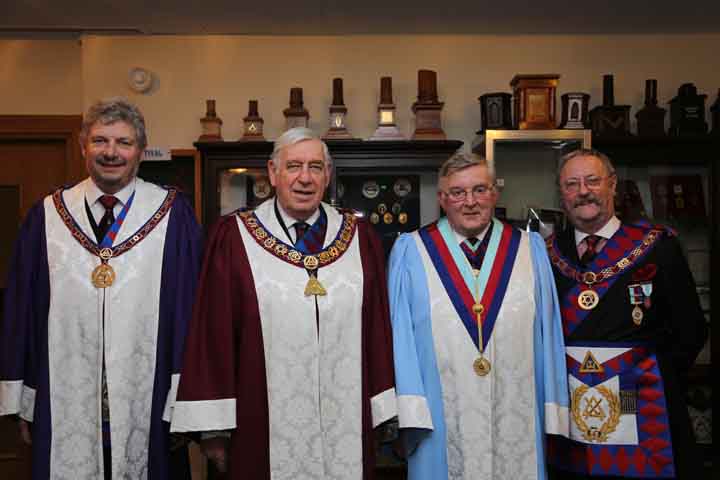 History in the making at Middlesex First Principals, No. 3420

Whither Directing Your Course ?