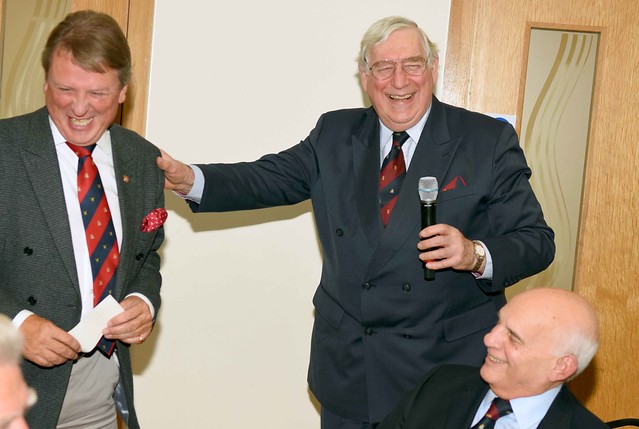 The Meeting of the Provincial Grand Officers (PGO) Club took place at the Brunel University in Uxbridge on Monday 29th October for its bi-annual meeting.

This event was an opportunity for the “dark blues” of the Province to catch up with old friends and a great and informal way for Middlesex Provincial Officers to renew acquaintance.

Whilst dining the Pro Provincial Grand Master and President of the PGO Club RW Peter Baker made a point of visiting each table to ensure that all was as it should be.

It also gave him an opportunity to speak briefly with some Brethren who had not met him before.

After dinner the Pro Provincial Grand Master announced the evening’s agenda which consisted of two talks from senior figures of both the Royal Order of Scotland and the Order of the Secret Monitor.

These were part of an ongoing series entitled “Beyond the Craft”.

This allowed a wonderful opportunity to discover “progressive freemasonry” in other Orders.

The presentation by the Royal Order of Scotland was given by the RW Provincial Grand Master Christopher Weeks and that of the Order of the Secret Monitor by Provincial Grand Supreme Ruler RW Bro Trevor Dutt. Their talks were listened to with avid attention.

After these talks the Provincial Grand Treasurer announced that a sum of £15,000 would be donated to the 2020 Festival.

Duly proposed and seconded a cheque was immediately handed over to the RW Peter Baker to his great delight.

The President mentioned the Service of Thanksgiving held at Guildford Cathedral the day before which he thought had been very well organised and appreciated by those who attended.

He went on to thank the Brethren of the Province for their exceeding generosity by raising in excess of £4 million for the 2020 Festival, especially when compared to the last Festival.

Lodge and Chapter Charity Stewards were singled out for praise for their tireless work.

He mentioned that the Staines Masonic Centre was due to close in December as the area was being redeveloped.

Many of the units from Staines would find new homes in Cole Court, Twickenham.

He also advised that the PMK Court had the official opening of the new Orangerie in September.

At the end of the evening the President and Pro Provincial Grand Master thanked all for their attendance and wished them a safe journey home and looked forward to the next meeting.

Brethren with Provincial or Metropolitan Grand Rank in either Craft, or Holy Royal Arch are welcome to join the PGO Club which is a wonderful opportunity to develop masonic friendships outside of the Lodge, or Chapter but in a masonic environment.

PGO Club – Address by The President