Wednesday 20th February was the Installation Meeting of Middlesex Masters Harrow Lodge, No. 9787 which, as is Provincial tradition, was attended by RW Bro Peter Baker, ProProvGM, together with Members of the Provincial Executive and supported by a Provincial delegation.

This was a memorable meeting in many ways;

The Master Elect was W. Bro. The Rev. Frank Ward, PAGChap, PProvGChap, DepProvGChap who at the ripe old age of 88 is the oldest WM of this Lodge (maybe even of any Middx lodge?).

Frank has served the Province in an active rank since 2004 and was also honoured by Grand Lodge as AGChap in 2005.

Frank joined this Lodge in 2009 and has served as Chaplain since 2010.

It was RW Bro. Peter Baker’s first Official Visit to Middlesex Masters Harrow Lodge since his Appointment and Installation as Pro Provincial Grand Master last Summer, although he has visited many times as part of the Provincial Team as DepPGM and last year he attended as the WM of Middx Masters Lodge No 3420.

The Provincial Delegation was made up of:

However, this was not the first time that he had the pleasure of Installing the WM of this Lodge since, as a Member of the Consecrating Team under the then Pro ProvGM, RW Bro David Cons, almost 14½ years on the 20 October 2004 at the BA Concorde Club at Heston, he had the privilege of Installing the Primus Master in the Chair of K.S., namely one W Bro Roger James Croome, PSGD, PAProvGM, as he was then.

Cama Lodge No. 2105 Working Tools presented by W. Bro. Dennis Foddy at the Consecration of No. 9787

RW Bro Peter Baker told us that “On that very special occasion, W. Bro. Dennis Foddy, who was the last Lodge Secretary of Cama Lodge No. 2105, which closed and surrendered its Warrant to the MWGM in June 2004, after almost 120 years, presented the Working Tools to Roger Croome.

Not a recitation of the ritual relating to the Working Tools, but rather that he was invited to physically present Roger with the magnificent box of refurbished Working Tools that had formally belonged to Cama Lodge and was donated, via the Province, to Middlesex Masters Harrow Lodge.

Bro Dennis had been Initiated into the Craft in Cama Lodge on 7th May 1964 and had been a Subscribing Member of the Lodge for over 40 years.

It was a very emotional occasion for him, and I recall that he had tears in his eyes when he presented the box of Working Tools to Roger and could hardly speak his words.

He is still alive, aged 90, and lives in Surrey and has now completed almost 55 years of service to the Craft.

If you have not looked at the Working Tools, then I recommend that you do so after the meeting.

They are exquisite and are now almost 100 years old and are made of solid silver with filigree work and the gavel has a black ebony head with a white ivory handle.”

The temple was full and 87 Brethren dined at the Festive Board for another most enjoyable evening together.

Brethren enjoying the Festive Board 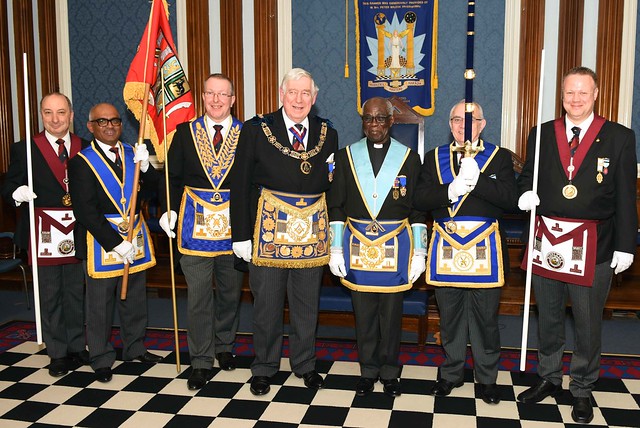 View photos from the Meeting HERE

Progress is the key