It was also the occasion of a visit by the RW Pro Provincial Grand Master Peter Baker accompanied by members of the Provincial Team.

At 11.00am prompt the Lodge was opened by the WM, W Bro Peter Gorman PPrJGD.

The visitors were welcomed including those visiting from other Past Masters’ Lodges in the Province and the regular business of the Lodge was then conducted.

The RW Pro Provincial Grand Master then occupied the Chair of King Solomon and greeted the Brethren on this special occasion of his first visit to Middlesex Masters Uxbridge as Pro Prov GM. However, he had formally been a DC in the Lodge.

The Pro Prov GM, before proceeding to Obligate the Master Elect W. Bro Paul Craker PPrJGD, informed him that he was, in fact, improperly dressed.

W. Bro Paul no doubt was slightly bewildered and the first surprise came when he was advised that he had been promoted to PPrGSuptWks.

After the having been duly Installed in the Chair of King Solomon, proclaimed in the East, West and South the Warrant was presented to the newly Installed Master.

The Pro Prov GM then congratulated Paul, who then proceeded to appoint and invest his Officers.

The Tyler W. Bro Barry Roberts was then admitted to the Lodge to be invested.

Many Middlesex Masons will know that W. Bro Barry is a highly efficient Tyler and Janitor in both Craft and Holy Royal Arch and a likeable and sincere mason who had not yet received honours.

Once again a surprise was in store for W. Bro Barry especially when the ProProvGM announced that he was appointing him PPrAGDC.

The Addresses were given by W. Bros Barry Cramer, Robert Rough and Paul Huggins in a manner which you would expect of their high rank and office.

The Pro Prov GM the proceeded to hand over to the WM a Steward’s Certificate from The 2020 Festival Committee, together with notification that the Lodge now had £200 from the Middlesex Provincial Relief Fund to donate to a Charity of the Lodge’s choice.

Just when there might have been no more surprises the Pro Prov GM was pleased to present a 60 year Certificate to W. Bro Len Worsdell who had been a Freemason since being initiated in Radnor Lodge 4451 in the Province of Wiltshire in 1959 together with a 60 year pin.

No doubt the Brethren who received promotions and a Certificate must have been very pleased with the morning’s events and not a little surprised as well. 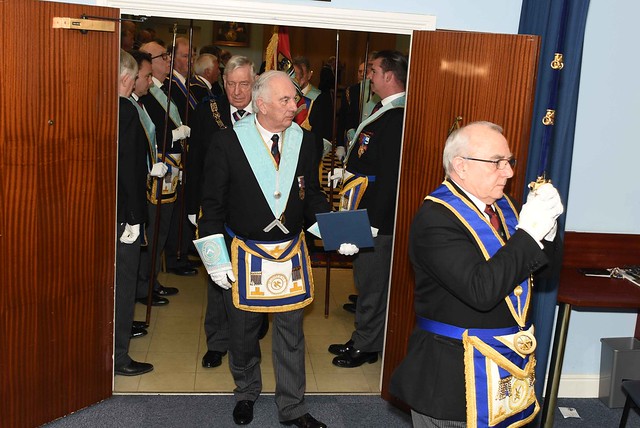 View photos from the Meeting HERE