Members of Parsifal Lodge, No. 5655 and their guests from De Hockstein Lodge, No. 241

For those Middlesex brethren who are aficionados of Wagner you might be slightly disappointed as the reference is not to Opera but to the Burns Night White Table held by Parsifal Lodge, No. 5655 at Cole Court on Friday 24th January 2020.

Amongst the many guests was a delegation of Dutch Freemasons and their partners from De Hockstein Lodge, No. 241 under the Grand Orient of the Netherlands meeting near Amsterdam.

The Parsifal Lodge Burns Night White Table is the 6th such event and it is fast becoming a popular in the Lodge calendar.

The Lodge opened briefly and was then closed after which the ladies were admitted with other guests.

The Lodge Secretary W. Bro Derek Partridge gave a series of talks about the Highland Clans.

At this point the guests were given a demonstration of how a Lodge is closed, that is the procession out.

In this instance the Dutch Worshipful Master and his Lady were included in the procession.

Bring in the Haggis –

The Lodge members and guests retired to the bar and at 7.30 pm they were then piped into dinner.

The Selkirk Grace was given by the Master of Ceremonies (MC) W. Bro Glen Grant.

After the first course of Cullen Skin (this is a hearty soup that is traditionally made with smoked haddock.

The name of this soup originates from Cullen, a small town in North East of Scotland and also the home of this soup, one of Scotland’s most famous dishes), the MC gave the Address to the Haggis which began with a walk around the tables accompanied by Pipe Major Roger Heath and the Honour Guard W. Bro Malcolm McNeill Chatwynne.

The main course of Haggis, neeps and tatties was then served together with a small dram of whisky.

This was followed by Clootie Pudding another famed Scots recipe.

After this repast the members and guests were entertained by two female Highland Dancers who gave an amazing rendition of the Sword Dance and were given a standing ovation.

Not to be outdone the MC finished the evening with a medley of Scottish songs and a few funny jokes.

The evening final closed and the Worshipful Master thanked everyone for attending, especially those from the Netherlands.

The next Burns night in 2021 is eagerly awaited.

Burns Supper Festive Board under way

To view more photos of the evening click here 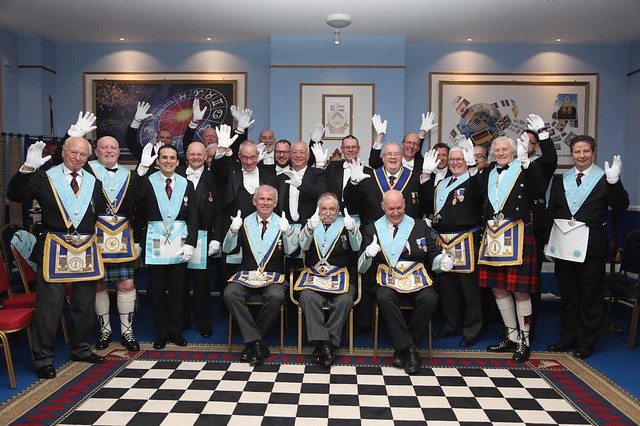 – Giving the chop to neglect of underprivileged children

A Right Royal Burns Night Out

Round Table Lodge in Bristol Fashion