Members of Cedars of Lebanon Lodge, No. 4317 with the Provincial team

Cedars of Lebanon Lodge, No. 4317 celebrated its centenary on Saturday 2nd October 2021 at Cole Court, Twickenham.

These are always landmark moments and should be cherished by all Provincial Brethren as an augur for the future of our Provincial Lodges of whatever vintage.

This particular meeting was also the regular Installation meeting of the Lodge.

The Lodge had been Consecrated on the 19th September 1921 and our Provincial historian Allan Beaver writing in Middlesex Matters, states this took place at Cafe Monico, London, which would have been situated where the famous neon signs of Piccadilly Circus flashed their adverts for the world to see.

Subsequent meeting places within the Province were at the Railway Hotel, Feltham; Albany Hotel, Twickenham followed by a period of meetings at the Staines Masonic Hall before finally arriving at Cole Court in 1953.

The Lodge was honoured, on the day, with an official visit by the Pro Provincial Grand Master, RW Bro Peter Baker.

After he had entered the Lodge and prior to the Installation of the Master Elect, VW Bro Barry P J Cramer, PGSwdB, DepProvGM, the RW Brother Peter took the Chair.

As the DepProvGM was not expecting this until the Centenary celebration part of the meeting he was immediately suspicious that something was afoot.

Indeed, it was, as the Pro Provincial Grand Master then proceeded, to the delight of all, to “turn the tables” on the DepProvGM and installed him in the Chair of King Solomon.

After the appointment and investiture of the Lodge Officers the Lodge ceased labour and went to refreshment – tea and biscuits.

Following refreshment, the ProProvGM again took the Chair and congratulated the Lodge on having achieved 100 years.

W Bro The Rev Frank Ward, PAGChap, PProvGChap, gave an excellent oration and following the Patriarchal Benediction, the ProProvGM presented the Lodge with a Volume of the Sacred Law to commemorate the hundredth anniversary and also read out a letter from the Provincial Grand Master, RW Bro HRH Prince Michael of Kent, GCVO, who congratulated the Lodge and wish its members well for the future.

The evening concluded with an excellent Festive Board and entertainment provided by Mrs Kaiya Maxfield, a singer and the widow of a Past Master of the Lodge, W Bro James Maxfield – See www.youtube.com/watch?v=rRB2Hkw4Ahc

From this you will find the masonic pedigree of Cedars of Lebanon Lodge which stretches back in the family tree to St Luke’s Lodge, No. 144 consecrated in 1765 which met in the Flask Pub, Ebury Square.

The record gives it as Chelsea but would today be very much Pimlico.

Whichever, this is firmly rooted in the territory of Middlesex before the 1888 Local Government Act which created the formal County of Middlesex and also the London County Council by cutting a swathe through those areas historically Middlesex

Further information is also available on this link – https://www.dhi.ac.uk/lane/ which will give the Lodge’s meeting places over time.

To view more photos of the Meeting and Festive Board – https://flic.kr/s/aHsmWRBsn2 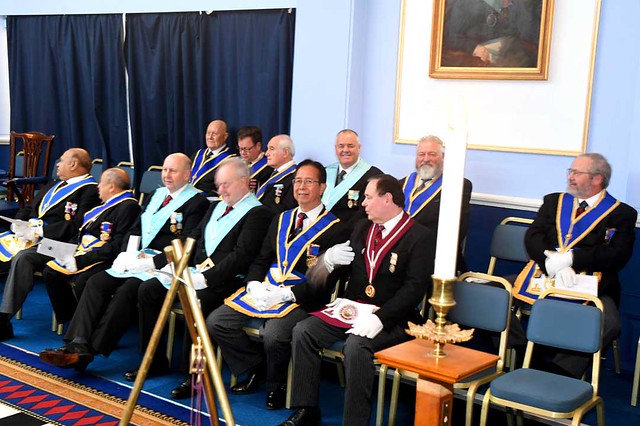 Patience is Rewarded at Harrow Temple in Unity Lodge

Draytonian Lodge – Back to Business