On Wednesday 22nd January 2020 a landmark meeting was held at Cole Court on the actual day of the 150th Anniversary of the consecration of both the Province of Middlesex and Burdett Lodge, No. 1293.

At the Clarence Hotel, Teddington, on the 22nd January 1870, Burdett Lodge was consecrated, and Col Francis Burdett then installed as Master of the newly formed Lodge.

Following the consecration of the Lodge, that same afternoon, the Province of Middlesex was also consecrated with Colonel Burdett as the inaugural Provincial Grand Master.

The requirement that he had to hold a Mastership of a Middlesex Lodge was thus fulfilled.

The new Provincial Grand Master came from an eminent family of baronets with their main seat at Foremark Hall, Derbyshire.

They also held property in Middlesex and other counties.

After a military career Colonel Burdett devoted himself to Freemasonry, and was a popular member of many lodges.

Through this involvement he was chosen as a suitable brother to run the new Province.

He later inherited the family baronetcy, at which point the Sir Francis Burdett Lodge, No 1503, another Lodge formed in his honour in Middlesex, added his title to its name.

After responding to the invitation advertised on the Provincial website and also the Mercury Lite, 63 brethren of the Province attended to mark this special anniversary, and were greeted by the WM Victor Burton.

All members of the Provincial Craft Executive were present.

The agenda included a reading of the Consecration Minutes by the Secretary, W Bro Vinod Pankhania, a delivery of the history of the Lodge by W Bro Tony Frankson and an address on the formation of the Province by R W Bro Peter Baker, Pro Provincial Grand Master.

After this feast of interesting early history of the Province and Lodge, the brethren then feasted in style at a sumptuous dinner.

The WM, Bro Victor, thanked the Provincial Executive for their support, and also Bro Vinod, the Lodge Secretary, for all his hard work in organising the event.

Bro Vinod took over as Secretary after his friend the late and much lamented John Culling’s very sad death.

With grateful thanks to W. Bro Paul Huggins APGM PSGD for compiling the report.

Read A Brief History Of The Formation Of The Masonic Province Of Middlesex given by RW Bro. Peter R. A. Baker, Pro Provincial Grand Master HERE

View photos of the evening HERE 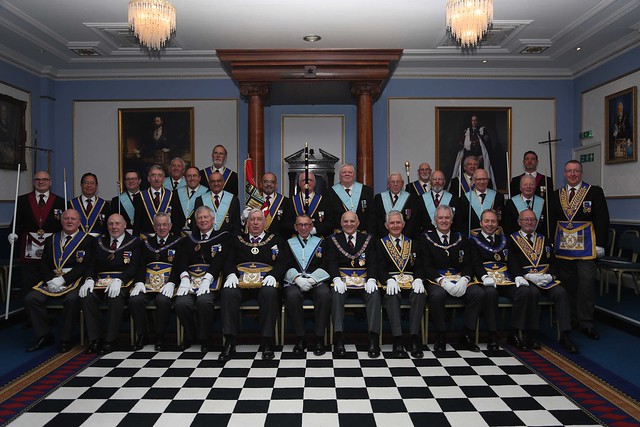 Read an extract from the Minutes of the Consecration Meeting here

Read the history of the Lodge here