E.Comp. Peter Baker, ME Grand Superintendent about to enter the Chapter

Members of the Middlesex First Principals’ (Southgate) Chapter, No. 9240 who met in early October left their spiritual home in High Street, Southgate. London N18, to travel to Harrow for the Installations of their Principals.

This is part of a planned development to rotate meetings of the Chapter between Southgate and Harrow and to give access to the Chapter for a greater number of Royal Arch Companions.

The Installation ceremony was performed by E.Comp. Peter Baker, ME Grand Superintendent in and over the Province of Middlesex, when he installed E.Comp. Peter Gillett PPrGReg as First Principal.

A highlight of the meeting was the presentation of a certificate by the ME Grand Superintendent, marking the Chapter’s appointment as a Grand Patron of the Middlesex 2020 Festival.

Most Excellent Companion Peter thanked the members present for their contribution, which was particularly noteworthy for two reasons.

Firstly, it was made by a Chapter which had only been in existence for six years, and secondly all its members were members of other Chapters, and already contributed to the Festival through those Chapters and their Lodges.

The Grand Superintendent wished E.Comp. Peter Gillett and the other Principals, as well as all the members of the Chapter, a very happy and enjoyable year.

Festive Board after the Installation Convocation

E.Comp. Peter Gillett responded by thanking the ME Grand Superintendent for leading the ceremony and the accompanying Companions for participating, and wished him continued success in his roles in the Royal Arch and Craft Freemasonry.

He welcomed the three Companions who had joined Southgate First Principals’ Chapter that afternoon, and thanked the Companions for making the journey to Harrow and to all who had made the evening such a success; in particular E.Comp. Michael Shurety PGStB PPrDGReg and E.Comp. Howard Hughes SLGCR, Scribe E and Treasurer respectively.

The Convocation was followed by an extremely convivial Festive Board. 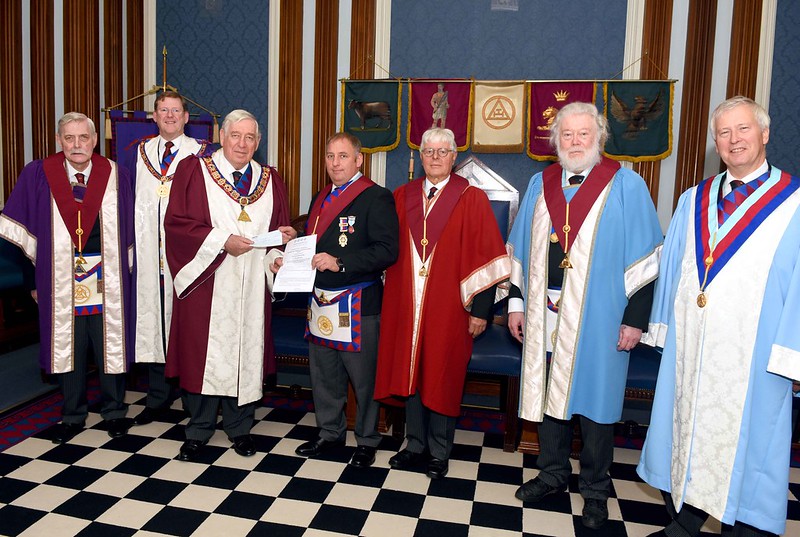 Royal Arch Appointments and Promotions for 2019/20