Many Middlesex Masons will have no doubt had the experience of a Lodge or Chapter Consecration, although these are relatively rare.

What if you were to experience a once in a lifetime masonic event which might never be repeated in your lifetime ?

Such an event occurred on Monday 25th November at Cole court when the Middlesex First Principals Chapter, No. 3420 met for their Installation Convocation.

It was a very special event for those who attended and after the opening of the Chapter by the Principals and the conducting of the early business the Chapter was called off.

The Provincial Team about to process into the Chapter

ME Provincial Grand Superintendent Peter Baker together with the other Principals took their seats in the East.

An Introduction to a Landmark Event –

ME Peter Baker gave a short introduction to the purpose of the Special Convocation which was to dedicate the brand new Provincial Standard.

Having expressed his grateful thanks on behalf of the Provincial Executive to the Chapter members for allowing the special Convocation to take place, he then briefly described some of the background to the Standard and the fact that since the Inauguration and Consecration of Provincial Grand Chapter in 1872 there appeared never to have been a Provincial Standard which had been ratified by Supreme Grand Chapter (SGC).

He complimented E. Comp Paul Steventon PProvGStB, who had worked with him in designing the Standard, which when sent off to SGC was approved in lightning time and had been very well received by the Royal Arch Executive and Companions in the Province.

This new Standard would be paraded on all occasions when the Provincial Grand Superintendent attended any Chapter in the Province, as well the occasions of the Annual Convocation, and also at the Annual Service of Thanksgiving alongside the Craft Provincial Standard.

An escort was then formed to bring the new Standard in to the Chapter. It was then dedicated.

E. Comp Mike Karn PAGDC, the Third Provincial Grand Principal gave an oration which explained the purpose of the dedication and looked into the prevalence of banners and standards in the Volume of the Sacred Law and also in relation to Military Colours, which were a rallying point for soldiers so that they knew where the Commander was so they could rally to his call.

He quoted from the Book of Psalms (Psalm 20), which specifically identified standard and banners in that, “we will rejoice in thy salvation and in the name of God we will set up our standards and banners”. E. Comp Karn went on to give more examples and explanations of the banners, ensigns and standards which feature in Royal Arch ritual.

The new Provincial Standard was then described as being unpretentious but very effective.

In the centre could be found the Arms of the United Grand Lodge of England but without the eight usual lions in the border.

These are replaced with the Saxon Crown and the three Seaxes (the small sword of the arms of the County of Middlesex), which were assigned in medieval times to the Kingdom of Middleseaxon. This sword was favoured by Saxon warriors.

The centre of the Coat of Arms is superimposed on two gold equilateral triangles and surrounded by a gold circle separated by two Triple Taus the name Middlesex and Provincial Grand Chapter.

E. Comp Mike Karn finished by suggesting that the Companions of the Provincial Grand Chapter of Middlesex consider the new Standard as a symbol of Royal Arch virtues and a beacon of inspiration and encouragement; a rallying point and refuge in times of need.

The Provincial Grand Chapter was closed and the Middlesex First Principals Chapter then called on.

The business of the evening continued with the Installation of the Principals by their respective Provincial Grand Principals counterparts:

The Officers of the Chapter were then appointed and invested and the Robes and Sceptres were presented by the outgoing Principals.

In the Risings a cheque was presented to the ME Grand Superintendent for the sum of £6,000 for The 2020 Festival with the promise of a further £1,000 from the Chapter Relief Chest.

It was a very special meeting and a masonic experience to be savoured. 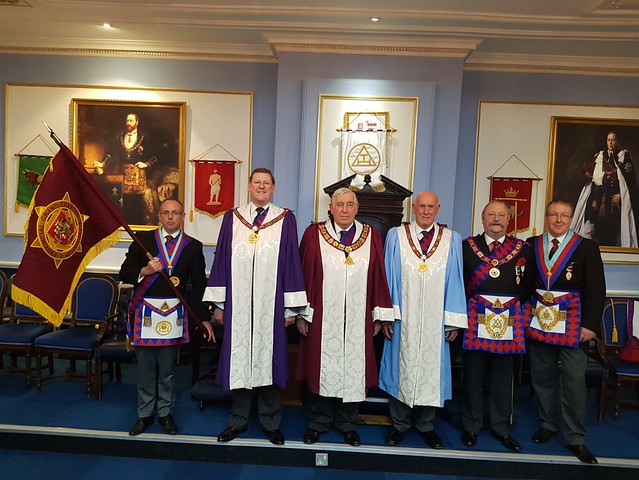 Whither Directing Your Course ?