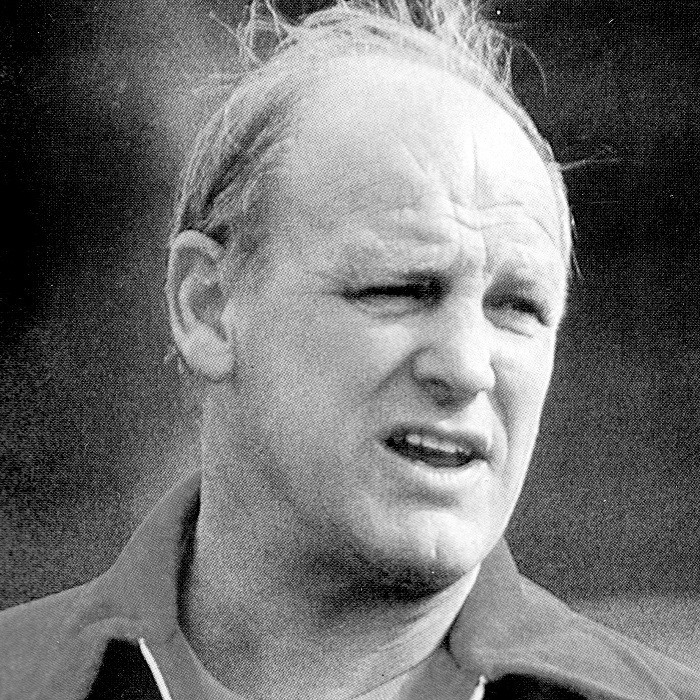 W Bro Stan Marut, News Editor for the Provincial Media Team looks at the career of Ron Greenwood, Footballer and Manager and his connection to the County of Middlesex. 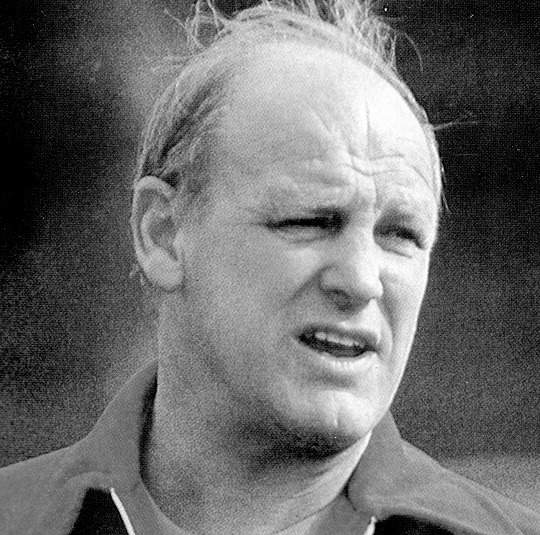 If someone asked you to name which famous Football Clubs are in the old County of Middlesex who would you name ?

For the purposes of this exercise only I nominate English Football League, or Premiership Clubs.

Brentford at first comes to mind.

But what about Fulham and Queens Park Rangers ?

Strictly their formation as football teams will take us back to the late 19th century.

Fulham was founded as St Andrews Cricket and Football Club, Star Road, West Kensington in 1879 which was in Middlesex.

QPR began in 1886 before the creation of the London County Council and the administrative County of Middlesex playing at one time in Park Royal.

Even Tottenham Football Club, was in Middlesex at the time of its inception despite being designated N17 as a postal code in the 19th century.

The subject of this article is, however, the former England football manager, Ron Greenwood, who had associations both with QPR and Fulham, as well as a period at Chelsea FC, which by the time it was formed was very much in the jurisdiction of the London County Council.

A few years earlier it might have been designated as a Middlesex Club.

Although northern by birth, much of his earlier years were spent in Middlesex where he went to school.

His autobiography is amassed with a wealth of information regarding his time as a footballer and as a manager.

The index of the book is like a football who’s who and many of the names are now legend.

However, he does not allude to being involved with freemasonry and it is only the limited knowledge regarding his membership from Lodge records and from Grand Lodge that we might piece together some sort of profile that may indicate where he was at that stage of his life when he became a freemason and also the time when he decided to leave freemasonry.

At School in Middlesex –

At the height of the depression his family moved in the 1930’s to Alperton.

Once down south and at school in Alperton he was mocked by his schoolmates for his Lancashire accent.

This temporary impediment was cured by his involvement with that common language of most schoolboys, football.

But like most boys of his background school days were over by the age of 14 and through the auspices of his father he managed to get an apprenticeship with a signwriting company for the meagre sum of 5/- (five shillings a week – 25p in today’s money).

The company had contracts with Wembley, Olympia and Earl’s Court and this afforded the young Ronald the opportunity to indulge in watching some of the sports that were part of the Wembley scene.

In the meantime, whilst serving an apprenticeship, he still played regular football for his school’s old boys team and also the Ealing Road Methodists.

Little did he know where his football prowess would take him.

It was about this same time that he was chosen to play for a Queens Park Rangers junior team and was offered the opportunity to sign up.

He hesitated and shortly after was invited to join Chelsea, an offer which he accepted, and become part of the Under 19 side, which was essentially the start of the famous Chelsea youth scheme.

The War brought difficulties to regular first team football and even after selection by Chelsea as a youngster it was in 1940 aged 19 that he got a game with the Chelsea first team at Aldershot.

Many footballers were called up and Ron Greenwood recalls that the Aldershot side had Joe Mercer and Stan Cullis playing for them, names of renown that older Masons reading this will recall.

He married in 1941 but meanwhile had been called up by the RAF seeing service in Northern Ireland and France.

He played football for RAF Command.

On his return to Chelsea after war time service he was not part of their plans and was sold for the princely sum of £3,500 to Bradford Park Avenue where he remained until 1949.

He subsequently returned to London with his family having been transferred to Brentford where he played more than 300 matches.

Chelsea re-signed him in 1952 where he stayed another 3 years. 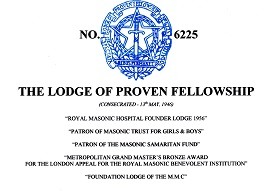 The Lodge of Proven Fellowship, No. 6225 – a London Lodge

In 1955 he was transferred to Fulham.

However, Masonry was still on the horizon and it was in 1956, when his playing career would have been effectively at an end, that he was Initiated on the 8th June into the Lodge of Proven Fellowship, No. 6225.

The Lodge roll had 57 Members and on the date of his Initiation there were 30 members present that evening together with 8 guests.

This would have been quite a heady introduction into freemasonry.

He would have been a relatively young Mason at 34 years old, describing his occupation as professional footballer residing in Greenford, a short distance away from Alperton where he had lived with his parents before the war.

Past Masters Jewel of the Lodge of Proven Friendship

He was quickly Passed and Raised becoming a Master Mason on the 14th September 1956.

This begs the question of who were his sponsors ?

What prompted him to become a Mason ?

Fortunately, the Lodge Secretary, was able to delve into the Lodge archives and give me some information which has helped in determining how Ron Greenwood took the Masonic path.

Grand Lodge records show that he was proposed by Bro W. A. Ellis, the Lodge Organist and a certain Bro E Lowe.

Being a Fulham FC fan since the late 1950s I quickly pieced together the evidence and it was non-other than Eddie Lowe of Fulham fame who introduced a young Ron Greenwood into the Lodge.

Eddie himself had joined the Lodge of Proven Fellowship, No. 6225 in July 1952 aged just 27 in a Double Initiation Ceremony with his brother Reginald Lowe 25, also a Fulham professional and he would have certainly known Ron Greenwood both from playing and from the Lodge.

Ron Greenwood’s autobiography showed he had a soft spot for Fulham and he played with future stalwarts in the team such as Johnny Haynes, Jimmy Hill, Bobby Robson who all went on to great things as Ron himself would do much later on.

Strangely and, perhaps, surprisingly, there is no mention of Eddie Lowe, his Masonic sponsor, who once he had left Fulham to take up an unsuccessful career as Player/Manager at Notts County, disappeared off the football map.

Yet Bro Eddie Lowe had gained 3 full England Caps in the late 1940s as a youngster playing alongside Billy Wright, Tom Finney and Tommy Lawton.

Football in the 1950s was still light years away from the multimillion pound business it would eventually become with players of, perhaps, no more skill and ability than people like Ron Greenwood, earning obscene sums of money.

It would not be until 1961 that the maximum wage of £20 per week would be abolished.

No Bentleys, or Cadillac Hummers, just the tube and trolleybus to get you to the game and back.

This situates Brother Ron within a social framework of “better offs”.

Strictly he had come to the end of his playing career and this would signal a new episode which appears to have run concurrent with his new involvement as a Freemason.

This date coincides, more or less, with the subsequent “retirement” from any Masonic activity including Lodge membership.

One of his predecessors in the England management, Sir Alf Ramsey, had also been a Freemason.

What Kind of Mason –

So, what are we to make of Ron Greenwood as a mason ?

Because of the passage of time, it is difficult to fill in the gaps and the lack of details in his autobiography, leads one to believe that his intentions may have been honourable, but his work commitments took him in a different direction.

There really is no way of knowing and we must assume that the vicissitudes of a career in professional football in the “modern era” did not allow that participation which perhaps, given different circumstances, would have allowed Ron Greenwood to progress within his Lodge.

The fact that he remained a member of the Lodge of Proven Fellowship, No. 6225 for more than 20 years may not speak volumes as such, but may indicate his willingness to have continued an arms-length association. 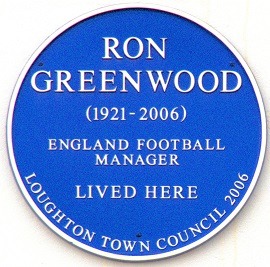 In a newspaper obituary it mentions that Ron had been President of the Old Alpertonians Football Club, a post normally held by the school headmaster.

This shows that he was still able to identify his football roots at his old school and in some ways shows an ongoing commitment to community activity.

He was certainly famous and a Mason, but in no way a famous Mason by virtue of Senior Appointment.

At least his Membership of a Lodge is recorded in the annals of Freemasonry, and this cannot be taken away.

Bro Ron received the CBE in 1981 after meritorious service to football.

Acknowledgements; A thanks to W Bro Peter Aitkenhead of the Library and Museum of Freemasonry and also W Bro Tim Bennett, Secretary of the Lodge of Proven Friendship No 6225 for their invaluable assistance in piecing together the masonic involvement of Bro Ron Greenwood.

Also read – Football and it connections with Freemasonry.

Lockdown or Lock Out