The Annual Service of Thanksgiving was held on the 7th November 2021 in Guildford Cathedral.

It had been two years since members of the Province were able to meet in the elegant surroundings of this lovely Cathedral.

The added bonus was the beautifully sunny afternoon which augured well for a memorable service.

The only regret was that the Cathedral’s management had stipulated a limitation on those who would be able to attend and members of the Province and their wives/partners were suitably distanced in the nave pews to limit proximity to others.

Nevertheless, it proved to be an amazing afternoon of praise and worship to the accompaniment of the Cathedral Organ played by the Provincial Grand Organist W Bro Dr Andrew C Storey DepGOrg, ProvGOrg. 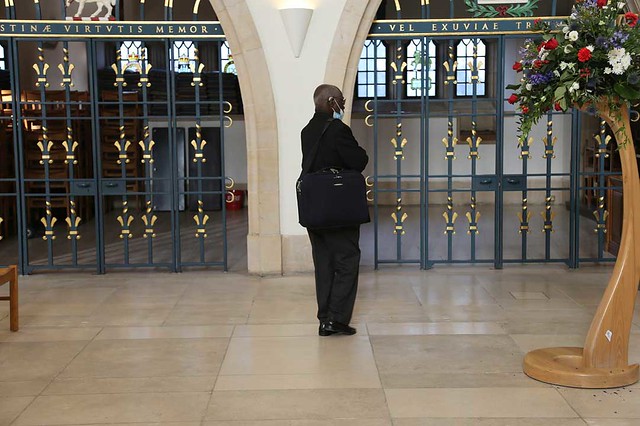 The service commenced with a parade of Lodge and Chapter banners, led by the Provincial Deputy Directors of Ceremonies, Provincial Grand Tyler, Provincial Grand Stewards and Bro. Lt. Col. Gary Boreham of Middlesex Armed Forces Lodge 9940, the Entered Apprentice bearing the Volume of the Sacred Law.

These were followed by the Provincial Executives of Craft and the Holy Royal Arch, accompanied by the Clergy of the Province and Cathedral.

As the sun cast its rays through the Cathedral windows, illuminating the Altar and the majestic columns of the building in a warm glow, the service proceeded, the First Reading being delivered by Bro. Darren Laws of Staines St Mary’s Lodge 6187.

This was followed by an exquisite rendering of Whispers in a Dream, by Caoimhe Earley, with her clear voice ringing throughout the building.

Readings from the Volumes of Sacred Law –

We were reminded of the fact that Freemasonry welcomes all faiths, with readings given by members of four other great faiths – Judaism, Hinduism, Islam and Sikhism, pointing out the universality of our Brotherhood.

These readings were taken from the relevant Volumes of Sacred Law: the Hebrew Bible, the Bhagavad Gita, the Qu’ran and the Granth Sahib.

An Anthem, Ave Verum Corpus, was sung by Andrew Wilson, then followed by the Second Reading, given by E. Comp. John Hillman, PProvGSwdB, of Bedfont Chapter 8382, reminding us of our own mortality and the judgement that awaits us at the end of our days.

Intercessionary prayers were offered by the Provincial Grand Chaplain W. Bro Revd Dr William Dolman AGChap. This led into the next hymn – Lord of All Hopefulness.

His message was one of relativity in Charity.

It pointed out that the smallest donation, given by somebody who may not be able to offer much, is more praiseworthy than a larger donation from somebody who could easily afford it. This New Testament story is more popularly known as the widow’s mite.

There followed an address by Revd David Cloake Vicar of the Church of Saints Philip and James in Kneller Road Whitton In his address he confessed a gap in knowledge of things Masonic, but after researching information available on the Internet about freemasonry was warm in his praise of our tenets and practices.

This was a refreshing accolade from a non-mason.

Again Caoimhe Earley delighted us with her wonderful voice in a vocal rendition of Edward Elgar’s Nimrod sung to the lyrics of Angela Lupino – We Will Stand Together, which might be an anthem to the fight against the ravages of Covid.

The Congregation was then led once more in hymn by the Middlesex Provincial Choir, directed by W Bro Frederick Chandler, PPrSGW and ably accompanied by the Provincial Grand Organist.

The hymn was Glorious Things of Thee are Spoken with the melody perhaps more familiar to us as the German National Anthem; the music by Joseph Haydn.

The Final Blessing was given by the Dean of Guildford, Very Revd. Dianna Gwilliams followed by the Closing Ode – Now the Evening’s Shadow Closing.

The Pro Provincial Grand Master closed the Volume of the Sacred Law.

The Labours of the afternoon had now ceased and the fading light of the Cathedral precincts heralded approaching dusk.

The service reached its conclusion with the Recessional Hymn – Guide Me Oh Thou Great Jehovah.

Although smaller in numbers this year, it was a joyous occasion and delighted those present.

The messages of the many faiths gathered to give thanks went with us as reminder that we all have much to be grateful for and to share that good fortune with others at every opportunity.

A grateful thanks to W. Bro Frank O’Keeffe PPrSGD, Media Team member, for the report.

Annual Convocation of the Provincial Grand Chapter of Middlesex

Changes in the Provincial Exec